Wages are a sensitive issue, because it is not only about people's livelihoods, but also about whether they feel treated fairly as an employee in relation to their own performance and the success of the company. Who earns how much is one of the greatest secrets in Switzerland, which is hardly talked about. Let's talk about it and figure out how we can change this! At Apps with love, we have developed our own wage model, which I will introduce in this article.

Wage negotiation always go the same way: people haggle like at a carpet bazaar. Those who appear self-confident and are good at selling themselves have a good chance of earning a higher salary. It doesn't matter if less a self-confident employee might actually be more competent. Of course, it ought to be up to the company to recognise this and award fair wages. Nevertheless, it remains a rather opaque matter, based on assessments and negotiation skills. How much people earn is usually guarded like a state secret and this encourages speculation: who makes how much? Why does this person earn more than me for the same job? In a good team, people talk to each other about their wages from time to time. In the end, the company is held responsible if wages are perceived to be unfair and this latent burden harms the team and the company.

OUR OWN SOLUTIONS FIT BETTER

At Apps with love, we have developed in a direction that enables us to determine our own rules and procedures, as well as design and optimise our own processes and structures. This helps us stay innovative, flexible, and capable of learning. Two years ago, we abolished senior management and replaced it with various decision-making boards that enable all employees to participate in decision-making within the company. Thanks to this, we are now doing better than ever.

IT'S NOT US WHO HAVE TO ADAPT TO A SYSTEM; INSTEAD, WE NEED TO DEVELOP FLEXIBLE SYSTEMS THAT ADAPT TO US.

I recently wrote another blog post about one of the boards. We also developed our work process ourselves and have developed it further over the years. It's not us who have to adapt to a system; instead, we need to develop flexible systems that adapt to us.


As a company that works on innovative solutions, we feel obliged to rethink things. You often come across solutions that already exist. Which is totally okay. But sometimes you also find new solutions that really suit you. Like people, companies are very different and rigid systems and processes disrupt work and corporate culture.

WHAT MAKES A FAIR WAGE MODEL?

In recent months, I have been intensively working on our wage model. The aim was to develop a fair model in which everyone is treated equally so that we no longer have to conduct wage negotiations at Apps with love. If all wages were posted on the notice board tomorrow, everyone should still be able to work together without any problems. At first, I thought of equal pay, but equality can also be demotivating. All employees differ in terms of experience, training, or responsibilities. Although wage transparency would be possible with this model, the most important thing about a fair wage model is that everyone knows and understands the evaluation criteria. It is not about wage transparency, but about fair and transparent wage criteria.

MOTIVATION CANNOT BE BOUGHT IN THE LONG RUN.

Wages should also not have too large a performance-related component, according to studies. Performance has to do with motivation and this is related to the culture, fairness, exciting projects, and general satisfaction at the company – not with the number on your pay cheque. Motivation cannot be bought in the long run.


A system that is too simple can rarely classify all employees fairly. Criteria that leave too much room for negotiation can also leave employees dissatisfied. We had to find criteria that were the same for all employees, involved a qualitative aspect, and were not negotiable.

We no longer evaluate employees according to individual performance, negotiation skills, and assessments, but according to facts. Our new wage model is based on a basic salary for all employees and four criteria that individually increase the basic salary: training, loyalty, responsibility, and experience. 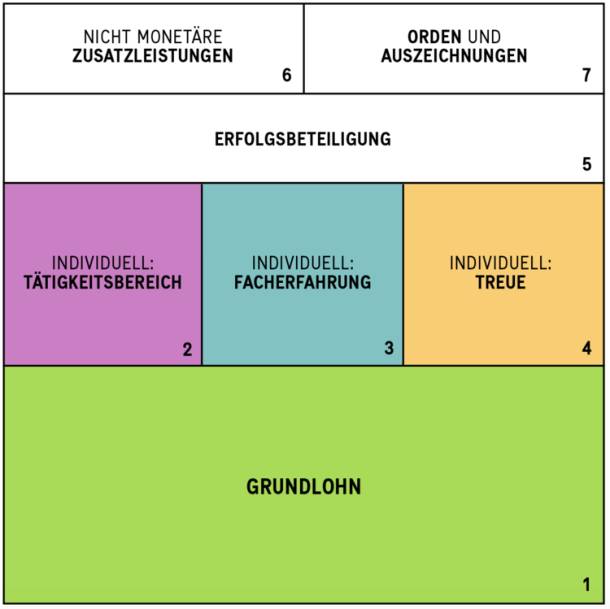 Main field the employee works in

Work experience in a specialist field relevant within the company

Years of permanent employment under a contract at the company

Non-monetary benefits offered by the company

Criteria 2-3 increase the basic salary incrementally by several hundred francs. In the wage discussion, the criteria are reviewed together and the employee's current level is determined. The basic salary is only different for employees joining the company from different backgrounds without specialist training. After three years, this lower basic salary mutates into the regular basic salary. 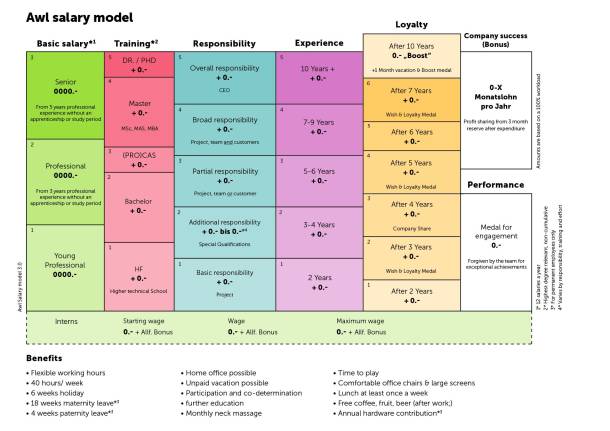 Non-monetary incentives such as 18 weeks of maternity leave, 14 days of paternity leave, 6 weeks of holiday, flexible working hours, home office, massage, lunch, further training, a say in the company, and much more are also important to us 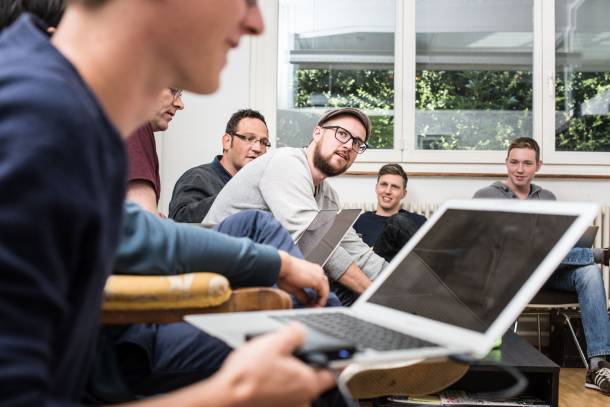 An order system gives us the opportunity to playfully express our mutual recognition and to reward outstanding achievements. These orders are awarded for outstanding achievements on a project and for loyalty to the company. With the yearly medals that are awarded for the first time after 3 years, you get a wish free that will be fulfilled by the company. Such things play an important role, at least as shown yet again by studies. The effects of honorary titles were investigated at the IBM research centre in Zurich and at a call centre. The result: those who receive an award work better afterwards. Those who got nothing did not work any worse. But what matters to us about this ritual is the fun of it.

ADVANTAGES OF THE APPS WITH LOVE WAGE MODEL

We no longer have wage negotiations and discussions and we evaluate employees according to criteria that are important to us in the company.

Even if we don't put every wage up on the notice board, the model is the same for everyone and everyone can work out roughly what wages other people receive. Employees can also estimate what their own wage will be over years, since wages develop year by year.

Since everyone is classified according to the same model, you no longer have to worry about whether someone negotiated better than you. There are transparent and fair criteria that are applied equally to everyone.

Long wage negotiations are no longer necessary. Wage costs can be better planned and less administrative work is required.

Wage totals are generated by the model, not the boss. Wage totals have become somewhat similar, since there are no more extreme outliers. The model produces gender-neutral wages based on criteria that are the same for everyone.

Of course, we also looked at existing alternative models, such as a model from Silicon Valley in which employees determine their own pay. This sounds cool at first, but the salary expectations have to be defended in front of the whole team, which creates enormous psychological and social pressure. It also favours people with big egos or popular employees who do not necessarily do a better job or have more experience.

This wage model means it is up to the employer and the team leaders to create conditions in which employees can develop and evolve their skills and motivation to the best of their ability. Those who are not motivated and cannot deliver their best performance will be able to coast along in this wage model.

We are aware that this version can still be optimised. The first criterion "Responsibility/field of activity" in particular is not yet completely free of debates on the principle. Nevertheless, I am of the opinion that there are different levels of responsibility in a company, even though each of us bears a high degree responsibility and each of us could not achieve a good result without the others.

A remuneration system that is perceived as fair overall facilitates better teamwork and good teams attract good people. The wage total for new employees is rather low, but the wage development is clear. We have to win over so-called "top shots" with something other than purely monetary incentives.

THERE IS OFTEN A LATENT SENSE OF UNFAIRNESS, WHICH WE HAVE BEEN ABLE TO RELIEVE OUR EMPLOYEES OF

In this way, we hope to find employees who can identify with our corporate culture. Employees who want to determine their own work-life balance, who put their confidence in Apps with love because of our transparency, and who actively participate in the company's success with joint efforts, thus increasing the monetary wage total for everyone. No matter how high or low the salary is, there is often a latent sense of unfairness, which we have been able to relieve our employees of. For our company, this means that wage costs can be realistically planned and are consistent with each other, and a lot of time is saved on wage discussions and admin. Of course, our model is not yet perfect and there is probably no such thing as a perfect wage model, but it is a new approach that fits in with our culture and values.

After one year of putting it into practice, we have had very good experiences with the wage model. Men and women had not previously received different wages at our company, but it is also good for customers and new employees to know that pay equity has been institutionalised at our company.

We collected feedback from staff and created version 2.0 of our model. The basic salary is now divided into three groups to give even more weight to work experience, from "Young professionals" to "Professionals" to "Seniors".

It was also important to us to incorporate individual education and training into the model, as a lot of time and commitment was often invested in a higher education.

It is not about wage transparency, but about fair and transparent wage criteria.

Till Könneker
Creative Direction | Co-Founder
Has a dreaded eagle eye and watches over the quality of our products. Often indulges in his thoughts and forges plans for how Apps with love can reach the next level without losing a life. Loves cats, kids and liquorice.
We just noticed that you surf with Internet Explorer. Unfortunately, our website does not look so nice with it.